So Many Pinots… Too Little Time

There she was, in a position she never thought she’d find herself in. A lavish Pinot party was being thrown and she alone would be host to five very seductive guests, five sultry strangers. How the night would play out, no one could be sure, but she planned to indulge in each of them. And she meant to talk about it… a lot. She even intended on judging them and how they measured up and would tell everyone she knew. 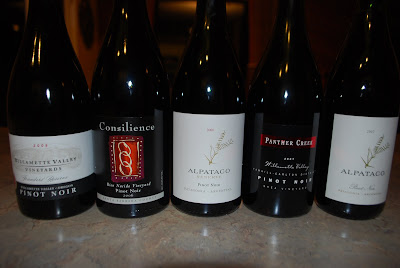 She welcomed her guests to her home; two native Oregonions, one from California and two from Argentina, adding some international flavor to the group. She knew which guests were planning to be there, she had invited them all—and she attentively prepared each of them for the pleasure they were about to share. Undressing each one slowly, focusing solely, intently and deliberately on one while the others watched with Pinot envy, she exposed a hint of their essence and breathed them in slow and deep. Their heady aromas filled her body and teased her with delight as she patiently moved from one to the next, opening them up, releasing just a glimpse of their unique promise. She sighed, looking at them all with wonder, “What ever will this one be like and what is it that you have to share with me?”

She tenderly touched each, stroking and then gripping their smooth necks, unsure where she’d exactly start… what she’d explore first. That exotic Argentinean was giving her hot and heavy “do me” eyes, so she decided then and there, Argentina would be last. She’d begin with the local flavors first, and venture out from there; though she had a wild side, the safe and familiar sometimes holds a certain allure. At some point, a feeling of decadence washed over her like a powerful ocean wave and she found herself drenched in emotion, feeling blessed with abundance no one person should know. 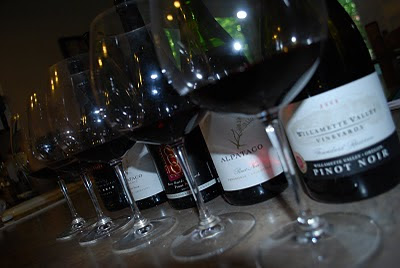 She would make the first move, but things degraded quickly. The ratio was five-to-one: them against her, her against them, her drinking them in, them waiting for her, her lips on one and then another, each of them teasing her and tormenting her with their lustiness… one after the other, individually and collectively, until eventually they all came together in what some might view a frenzied climax of indulgement… a pinotrgasm (the ‘t’ is silent) if you will. She’d never enjoyed five at once… wow. And then she put it down in words:

Willamette Valley Vineyards 2008 Pinot Noir Founders Reserve: The nose of this wine immediately calms and soothes you with its smooth and silky aromas… almost as if it were Al Green whispering in his deep and throaty voice, “Oh yeah baby, just drink me in and let me take you over, I can show you a night like no other. Stop thinking, just open up and let me in for a soulful experience of the vine.” The strawberry and floral notes draw you in, while the tart cherries, smoked meat, earth and funk provide an “anything but vanilla” experience of Pinot Noir.

Panther Creek 2007 Shea Vineyard Pinot Noir: The deep ruby color of the wine captures your attention the same as a pretty girl might. You wonder about what’s beneath the surface, surely there’s more than meets the eye. The fragrance is captivating… expect this wine to press you against the wall with its beautifully balanced, harmonious, yet detectable juicy black plum, tart cranberries, cassis, earth and violet notes that add subtle notes of femininity and grace to an otherwise powerful and dominating wine.

Consilience 2006 Bien Nacido Vineyard Pinot Noir: The deep ruby color of this wine immediately sets the stage and you know you’re in for something a little bit different. It will lick your lips and flick your tongue with sweet blueberries and blackberries, though there’s still a bit of that Northern California “earthiness”. Know what you’re getting into with this one though: it’s pretty hot, will get you drunk and finishes quick.

Alpatago 2007 Pinot Noir (Patagonia, Argentina): Deep and dark, you swirl thinking you may have discovered something complex and mysterious only to discover it’s about as misleading as a man on a first date. The wine lacks structure, is fairly viscous and overly tastes of American oak.

Alpatago 2006 Reserve Pinot Noir (Patagonia, Argentina): Rico Suave—pure charisma, this wine could be the life of any party with bright and playful acids and its strong backbone. More rich and intense than your typical Pinot noir, it fills your mouth with ripe plums, figs and black currants.

Until we sip again…

Great work...and you are very brave for taking on five Pinot at once!

We had the consilience at Storyteller during the tweetup.. They really need to call that port or something other than pinot.. think it was 16.5% alcohol...

Thanks Josh, guess I walk a fine line!

Todd, I can always count on you for the truth and a smile, thanks!! Yeah, couldn't believe the alcohol on the Consilience either. Here's to light and elegant Pinots!