Eat to Live, Live to Eat or Just Simply Love to Eat

The name James Beard is to foodies as Pavlov’s bell is to dogs. You hear the name and you immediately think of food so genuinely good and so simply scrumptious that your mouth begins to salivate. 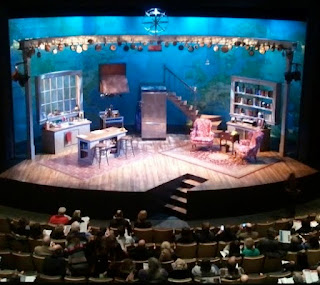 If you love to eat, are interested in the Portland food scene or culinary history, this is one play you don’t want to miss. Portland Center Stage is currently running I Love to Eat, a play that showcases the culinary genius James Beard, at the Gerding Theater through January 24, 2013.  Actor Rob Nagle brilliantly portrays the larger-than-life iconic figure who elevated cooking to an art form (while keeping it completely accessible) in this one-man show about the legendary chef from Portland. Nagle spoonfeeds the audience tidbits about cooking, and the history of cooking. You'll learn that the earliest recipe was one for beer and was written as a poem 6,000 years ago. He'll even demonstrate how to whip up a perfect mayonnaise, and surprisingly produces a batch of what looked like tasty sandwiches for those lucky enough to be sitting in the front row. I Love to Eat is not only a whole lot funnier than I expected, it’s also peppered with generous dashes of warmth, honesty, tenderness, passion and beauty, which all come together to fill you up and leave you truly satiated, as if you'd just consumed a wonderful meal presented by the perfect host.

The play honors the epicure who started it all.

Long before the Food Network was concieved, James Beard was the star of the first-ever TV cooking show on NBC called I Love to Eat (in 1946) where he demonstrated techniques for everyday American cookery. He wasn't a gourmet—in fact he despised the pretentiousness of that word—Beard’s philosophy was “Be simple. Be honest. Fresh ingredients, the best you can find, in season.” It’s a bit ironic that a man who wrote 26 cookbooks would say something like “There are no new recipes, just variations on a theme,” and yet he did. His ground-breaking way of cooking, one that included being true to one’s region, has stood the test of time and inspired so many great chefs.The James Beard Foundation was set up in his memory to provide recipes, education and scholarships that help aspiring culinary students from all walks of life, while preserving his vision of American culinary's heritage and future.

You don't have to be a chef or a foodie, you just have to love to eat.

I’ve accepted it, as a Jewish girl, I've always known how to eat… let’s face it, food is in my genes. As a skinny child, I think I heard the words “Eat, you’re a growing girl” (insert New York Jewish mother accent here) more than I heard anything else, including "Would it kill you to clean up your room?". My memories of childhood strongly steeped in food, like a good cup of tea. Food was not only the centerpiece of every religious holiday, it was also used as reward for good behavior, punishment for bad and was one of the ways my parent’s showed their love (my mother by cooking our favorite meals and my father who valued sharing culinary experiences with his kids by taking us out to ethnic restaurants so as to expose us to different foods from around the world). Though I clearly understood the foods of my culture, I wouldn't truly understand or appreciate the foods of my region, or seasonal or locally-sourced cooking until I moved to Portland.

Portland gets a new pantry.

Portland is fortunate to have a multitude of seasonal and even some year-round farmer's markets. And with places like New Seasons, finding fresh, local produce and the best ingredients needn't ever be a challenge. But things are about to get even easier and more interesting for Portlanders. Watch for the James Beard Public Market at the west end of the Morrison Bridge to arrive soon. The full-time, year-round, indoor-outdoor market will feature 40-60 permanent vendors who can help you satisfy your cravings for fresh and local cuisine. 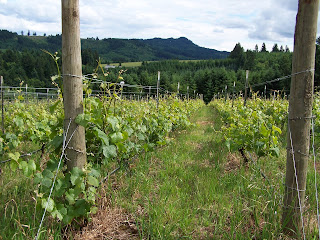 Where over 3,000 grape vines are now planted once stood a Christmas Tree farm. Paul and Lori Gates purchased the property in 1996 with a vision, their eyes set on the ideal spot for growing wine grapes. They cleared four of the estate’s seven acres and planted them to four different clones of Pinot Noir. Located on Iowa Hill in the Chehalem AVA at a 900 ft. in elevation, Gresser Vineyard is now planted in the Burgundian style, close to the ground, to capture the night’s escaping heat. Paul sees the value in paying close attention to his vines to produce the highest quality fruit and does so by being personally connected with his vineyard. In fact, he walks the vineyard regularly with a backpack sprayer to ensure he sees and can respond to every single vine. 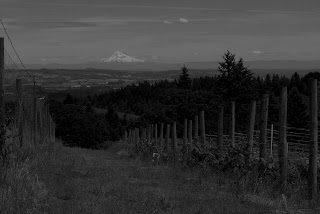 Producing the estate’s handcrafted wine has become a labor of love for the entire family. While Paul is the primary winemaker and vineyard manager, the whole family is involved in the production and management of the vineyard and label.

Gresser wines are truly value wines. You can consider them everyday wines, with an average price of $20 a bottle. In 2009, the Gates produced 700 cases, and as their label grows, the family is considering purchasing fruit to complement the grapes grown on the estate. 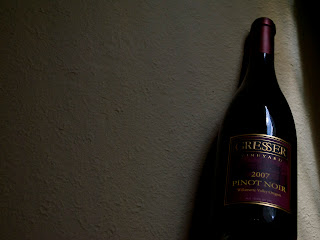 Paul is a man with a past. He grew up in California's wine country, and has worked for a number of prestigious wineries, from local producers Shafer and Montinore, to the heavy hitter, Korbel, where he developed a taste for the bubbles. And though he hopes to produce a sparkling wine by next harvest, the Gates have also set their vision on building a gravity flow winery into the hillside of the estate in the next year or so. In the meantime, however, you can taste their wines at 1910 Main in Forest Grove, in co-operation with four other wineries and owned by the 1910 Main - An American Bistro conveniently located right next door.
Posted by Sip with Me! at 11:26 PM No comments: