A Glimpse at Lost Loves… or a Really Bad Wine List? 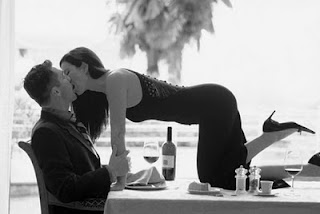 My passionate love affair with Pinot noir continues, yet each time after she’s gone, I wonder if I’ll ever see her again. Why does she torture me so? Lying there alone, savoring what we just shared, I still taste her exquisite beauty on my lips and feel her warmth in my body. I’m brusquely awakened from my intoxicated state of euphoria by sudden flashes of past loves appearing before my eyes; I realize it’s more like a glimpse at a really bad wine list.
You might call me a lush; yes, over the years, I’ve sipped from a few ‘bad’ bottles. Back in high school, if you really must know, it was always about quantity over quality. I probably shouldn’t share my dirty little secret with you, but my first time was actually a threesome… me, Bartles and James. The three of us played drinking games long into the night, getting into all kinds of mischief (not to mention the ritual hanging our heads together over the porcelain bowl of disgrace). We were completely shameless, doing it in public places, sometimes even with a crowd around us. Our cheap and taudry affair lasted too long… until college, when I met my first (real?) love.

While my peers were guzzling beer from the keg, I was chasing after this frilly pink label that caught my eye. She was racy, flirty and they called her White Zinfandel. We had a lot of fun and sometimes, when I added bubbles to the party, she’d get really crazy! We were inseparable and she somehow kept me interested for a time. I soon realized she mostly just gave me a headache. No, she wasn’t the one for me, so I wrote her a Dear Zin letter and went in search of something more genuine.

One day, when I least expected it, there he was staring at me from across the red and white checkerboard tablecloth, Mr. Genuine himself… Sangiovese. By the glow of the candlelight he looked magnificent… all rustic and Old-World. Our conversation flowed easy as a bottle of fine wine and the two of us were comfortable, enjoying each other’s company as if time no longer existed. But you know those Italians, he was a bit of a heartbreaker and we inevitably parted ways. We’re still great friends though and even see each other from time to time over a big hearty bowl of pasta.

After a few months of chocolate and self-indulgence, I briefly opened myself up to Tempranillo, but quickly realized he was just a rebound guy (his woodsy style just wasn’t a match for me either and we both knew I was meant to explore other loves). That’s when I met Chardonnay. We dated for a bit, but the chemistry just wasn’t there either—I guess blondes don’t really do it for me, and besides, she was really only fun with dinner. So there I was, alone again.

One day, I finally let my friend Kathleen set me up — she swore we’d hit it off, and she was right. That night, over take-out pizza, Merlot and I made a deep connection. He was smooth and easy and we seemed to have an immediate and unspoken understanding. We went along happy for many years… that is, until I moved to Oregon and discovered Pinot noir.

Pinot noir and I really became intimate while I was working in the wine industry; one look was all it took, and it was if no other wine had ever existed before. Sounds a bit corny, like lust at first sight, but sometimes you just know these things. I knew there was something special about this wine and I just couldn’t and didn’t want to ignore it. I let her seduce me, which she did so many times and on so many levels—filling all five of my senses with her essence. Our affair began with an incomparable intensity; I couldn’t get enough of her. Some things are just meant to be continued. But she remains elusive and, at best, minimal indulgence is all I’ve enjoyed so far. And while my feelings for Pinot noir may be hot and heavy today, I imagine the day may soon come when that spell is broken. Perhaps I’ll finally tire of the pursuit. With so many great wines flaunting themselves at me daily, it’s quite frankly hard to resist all the temptations. And who knows, perhaps it’s time to start exploring the wine shelf again and see if another varietal sparks my attention the way my sexy little Pinot did. Until we sip again…

Well done. Your posts always make me want to run home and get close with a beauty from my cellar.

Thanks for your comments Todd, I'm so glad I motivate you. Whatever it takes to get you into that cellar! :) Re: said ass… I wish I could say it's mine. :(

Tamara, you must quit writing posts like this. It makes it difficult to get up from my desk and walk around.

I think you should compile all of these into a short online book. They're very seductive and tell quite the story too.

Ha ha Josh! Thanks for the encouragement, I'm really just having a little too much fun!

I love the creativity in this post. Thanks for the look into your tawdry past. :)

Thanks Ben, that really means a lot to me!

And just to clarify, this is really MOSTLY fiction… although there may be threads of truth running through here and there.

Tamara, you hussy! I guess it's hard to choose just one. You crack me up. Love seeing you have so much fun with your craft.

Fun post! Let us know your favorite Pinot's from the 2008's when you taste them!

Even trying the Tempranillo, means you must be willing to well....I'll leave that alone.

I will say that post certainly made me laugh and reminds me of when my wife asked me if I felt like I was cheating on California Cab's when we had one from Washington state the other night.